What is vitreomacular traction?

Vitreomacular traction refers to a condition in which changes occurring in the vitreous gel at the back of the eye cause pulling, or traction, on the macula, the highly sensitive area of the central retina responsible for detailed central vision. This causes impairment of central vision.

In order to understand the effect vitreomacular traction has on vision, it is helpful to know a little about the eye and how it works.

The eye may be likened to a camera. In the healthy eye, light passes through the lens and vitreous to reach the retina.

The retina is the light-sensitive nerve tissue that lines the inner wall of the eye, like the film in a camera. It contains specialised photoreceptor cells which convert light into electrical impulses. In the healthy eye these impulses are sent via the optic nerve to the brain, where sight is interpreted.

The macula is a tiny area at the centre of the retina. It is responsible for our detailed vision, allowing us to read, recognise faces, drive and see colour.

The vitreous is a clear, gel-like structure which occupies about two thirds of the volume of the eye. It is comprised of over 99% water, but also contains structural elements such as collagen fibres and proteins. As we age, changes occur in the vitreous, and the back surface of the vitreous collapses away from the retina. This is known as posterior vitreous detachment, or “PVD”. A patient may experience flashes of light and new floaters as this process occurs.

Sometimes during vitreous collapse the vitreous fails to completely separate from the retina, and pulls on the macula to cause vitreomacular traction.

The normal process of ageing of the vitreous causes collapse of the gel within the eye. In most persons the vitreous separates from the macula during a posterior vitreous detachment or “PVD” but in a small minority the vitreous stays adherent to the macula and pulls on it, causing it to become distorted by traction, resulting in swelling of the macula. 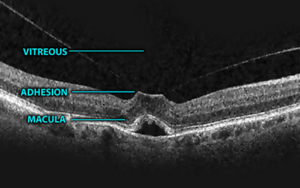 How does vitreomacular traction affect your sight?

Common symptoms of vitreomacular traction include blurred or distorted vision, and a central kink in a straight line or edge.

Vitreomacular traction has a high rate of spontaneous resolution. With time, the vitreous gel will separate from the macula, and all symptoms may improve or disappear completely. In most cases therefore a period of observation will be recommended by your ophthalmologist.

It is only in persistent cases where the condition fails to improve or worsens progressively that treatment will be recommended. Treatment requires a surgical procedure known as a vitrectomy

The purpose of surgery is to separate the vitreous gel from the macula, which relieves the traction exerted on the macula. When this is done the retinal layers can return to a more normal position, and when this occurs the vision will often improve. Vitrectomy surgery carries a high rate of success in correcting vitreomacular traction.